Home safely in his Creators arms ! 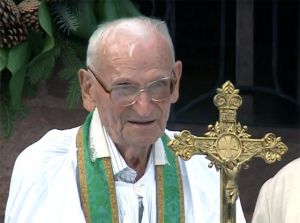 May God grant eternal rest to dearest Father Antal, Bíró János, who tonight 13 December 2016 returned his noble spirit to His Creator in the hospital in Kecskemét !!

His funeral arrangement will  be released later . The attached little film was taken at the 75th anniversary of his ordination in Szászváros, 24 September 2016.

Praying for the salvation of his soul ,