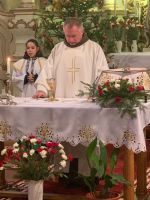 I started my monastic life in the monastery in Dés , the service of God as a Franciscan !! Many beautiful memories attach me to this monastery ! Dear Father Ervin was in charge , beside Father Dezső and Father Hugolin and Brother Rókus completed the community , that took me in as a young novice!!

A MESSAGE FROM THE LAND OF MARY : MANKIND'S VOCATION , TO CREATE A FEAST WITH SELF-SACRIFICING WORK ! 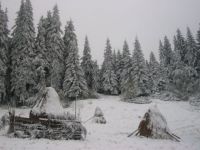 On the last day of the year a gentle knock attracted my attention . A very unassuming ,smiling woman was standing at the entrance of the monastery . She came from Kismuncsel that is roughly 30 km from Déva from an abandoned mining settlement, this mother of four, in trouble, of Hungarian background but no longer speaking a word in Hungarian.

Read more: A MESSAGE FROM THE LAND OF MARY : MANKIND'S VOCATION , TO CREATE A FEAST WITH SELF-SACRIFICING...

“ EVERY DAY YOU HAVE TO MAKE A CHOICE “

A few years ago around Easter time I was at a slum district near Déva. We took gifts for the poor ! A young man came up to me and asked me to bless his house. He was youngster aged between 16-17 years , I even asked him did the house belong to his parents . He proudly answered “no” , this one was built by him. In this area there were around 30-40 such small huts: this boy also collected the stones , pieces of bricks and built a tiny house . From the outside it looked ramshackle , but on the inside the walls were nicely smoothed down , and on one of them with blue letters a “scribbled” writing saying: “Welcome my darling wife ! “ I looked at him with widely opened eyes , then he told me that during the night his tiny daughter was born . The day after tomorrow he is going to the hospital to bring them home into their little house .

Read more: “ EVERY DAY YOU HAVE TO MAKE A CHOICE “

At the dawn of our Lord’s 2002-nd year, on the threshold of new hope 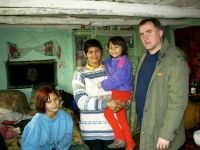 I visited three of our children who were spending their vacation in Vajdahunyad . I stood shocked in the doorway of the simple garage made out of concrete. After my eyes got used to the semi-darkness I closed the rough iron door behind me. Deep inside the garage on a convertible sofa-bed the grandmother, the mother and the three children were huddled  up together .The father kindly invited me in and offered me a place . I embraced Robika aged ten, Maria aged twelve and the thirteen year old Petra .

Read more: At the dawn of our Lord’s 2002-nd year, on the threshold of new hope 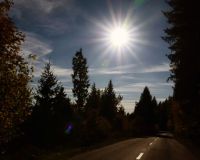 Christ’s second coming will be at the end of time as well. The Church is also awaiting that our Lord Jesus Christ will come again and be visibly with us for ever .

Prayer at the end of the school year !

We dropped in at our house in Csíksomlyó named after Saint Stephen, here too we were welcomed by the vacation mood, the young people were having fun looking at the photos from the last school year!!!! I was looking at the brightly coloured  photos taken by them and quietly I was praying for them :

Read more: Prayer at the end of the school year ! 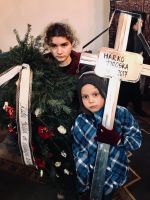 I received this letter years ago from Markó Piroska ! It says a lot about her  beautiful spirit, her love for the children ! A lot of people do not even accept their own child, Piroska took care of other people’s children and even during her holidays she loved , cared for them as her own ! Often I pray that children growing up in their own families receive so much love , care, time spent with them as they do growing up at the Saint Francis Foundation, received from her, and the carers who accept them, take them in !

At her funeral her children though nobody asked them, took the cross, the wreath and brought it to the grave !

Rest in peace dear Piros ! With prayer and love,

Are you getting  the Advent wreath ready ?? Advent is a precious talent too, do you burry it or are you making good use of it , you decided!!

In the presence of the Holy Eucharist…… 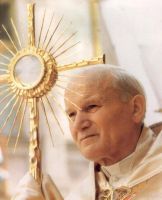 With all my love from the bottom of my heart I encourage you, please spend more and more time in the company of Our Lord Jesus Christ present in the Holy Eucharist !I cannot grasp either the Infinity that comes to us in form of the Eucharist neither with my mind , nor with my with my senses , but I can embrace it with my faith’s two arms and this way I can spend time in His life-giving holy presence ! The life-giving force of the holy presence of our Lord Jesus Christ , just like a magnetic forcefield that cannot be grabbed by hand yet it is around us quite certainly because I can feel this effect. What I experience during adoration , that this magnificent holy presence cleanses me, makes me better , fills me with the inner happiness of singing the Magnificat , with strength, courage , and this is why I call you to be the your spirits in this holy, life-giving , realistic presence of God !

My dear children, my beloved sisters and brothers , I encourage you that in all our troubles , worries let’s flee to our Lord Jesus Christ , He really is present in the Holy Eucharist and as He Himself promised  several times, and He is great enough to protect us with His tender love !